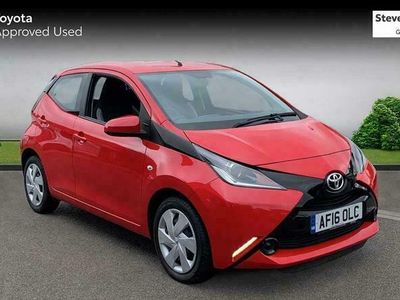 PE27 5RE None, Cambridgeshire

The Aygo is an important car for Toyota, as its opening budget small car it has a potentially vast market. The history of the first generation, released in 2005, is one of failing to capitalise on this opening. Though it underwent two differing updates the first generation failed to evolve adequately over the near-decade of its life. The second generation is a much improved car though, especially in the handling department.

First Generation (2005 - 2014): The first generation covers the bulk of the Aygo's releases and can be roughly divided into three distinct phases. The original model, the first facelift in 2009 and the second facelift in 2012. Everything barring trim levels and styling stayed much the same however.

The engine selection for the first generation is extremely small, with only a 1.0 litre petrol or 1.4 litre diesel to choose from. Toyota designed the Aygo strictly as a city runaround, and they took this decision to its absolute conclusion. Whether this was bold or simply just limiting is a decision for the customer to make, but it's probably a little more of the latter. That said, the Aygo's engines are certainly frugal and combined with the cheap purchase price you can't get a more economical small car.

With the cheap price tag does come a cheap interior though, there isn't even a glovebox which is a general indicator on storage space too. Namely, there isn't any. Extras were few and far between too although this was remedied over the course of the overhauls in 2009 and 2012. Things such as metallic paint, side airbags, alloy wheels, air con and bluetooth were gradually added, but none of this took away from the general poverty of the interior.

That said, the Aygo never claimed to be anything more than a city runaround and with its small chassis and tight turning circle it is certainly adept at city parking. You can squeeze the weekly shopping in the back if that's all it's for.

Second Generation (2014 - Present):
Toyota went for a new tack with the second generation, firmly aiming the car at the youth market. Fun seemed to be the buzzword and the much improved handling actually added some reality to the claim. The model was fully released in June 2014 and has thus far received a warm reception.

The engine range doesn't seem like too much fun, the 1.0 litre variable valve comes with the same three cylinder set up and continues to favour frugality over performance. The fuel consumption is certainly impressive though with 60+ mpg a regular claim within promotional materials from Toyota.

Whilst the exterior styling and handling are very much improved, the interior is still somewhat lacking. The usual equipment has been added in order to keep the Aygo relevant, but it's still a budget car through and through. Not enough has changed since the first generation to warrant consumers having a rethink.

The Aygo is extremely economical, but it lacks safety features and as an everyday car it seems far too limited. As prices for the Ford Fiesta continue to fall and with quality competition like the Honda Jazz also present, the Aygo seems superfluous.

All regions for Toyota Aygo

All fuel types for Toyota Aygo

All years for Toyota Aygo

All gear types for Toyota Aygo

All body types for Toyota Aygo

All trim level for Toyota Aygo