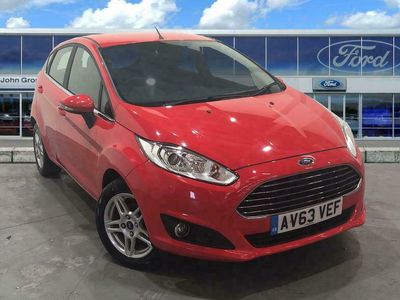 The Ford Fiesta has been a staple of the hatchback scene since 1976. The latest incarnation is the sixth generation and since its launch in 2008 it been hailed as one of the best small cars around. Sales figures have also marked this Fiesta as a great success though this could be more to do with people downgrading to a smaller car in the wake of the economic downturn in 2009. Regardless, this genuinely handsome small car has scooped a variety of customer awards and is well worth considering. The Fiesta range is extremely large with a huge selection of engine types and trim levels to choose from. There's something for everyone here.

The newly designed three cylinder Ecoboost models is great for those concerned with fuel consumption and comes with two options, the 80 BHP standard and the 100 BHP turbo. The rest of the ranges powerplants feature the staple ford engine lineup of 1.25, 1.4 and 1.6 litre petrol driven engines and of course the 1.4 and 1.6 litre diesel varieties. Trim options again follow the standard Ford pattern with Studio, Edge, Zetec and Titanium available in both 3 and 5 door format.

An update was carried out in 2012 with a new stylish grille not to mention the addition of some technical wizardry to some models. Examples include the Active City Stop function, which automatically applies the brakes when a collision is sensed, and the Sync interactive connectivity system.

Alongside the VW Polo the Ford Fiesta is definitely leading the class, especially in terms of styling. Any accomplishment in style could be considered subjective, unlike the Fiesta's power and handling which are objectively stunning. The interior build quality is still better on the Volkswagen Polo but as a pure driver's car the Ford Fiesta is very hard to beat.

All regions for Ford Fiesta

All fuel types for Ford Fiesta

All years for Ford Fiesta

All gear types for Ford Fiesta

All body types for Ford Fiesta

All trim level for Ford Fiesta